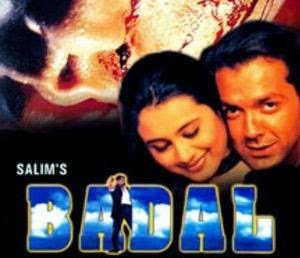 Synopsis: Badal (Bobby Deol) is a victim of the 1984 riots, brought up by a terrorist (Ashish Vidyarthi). Badal lives with the sole aim of exterminating a police cop Rana (Ashutosh Rana) now the DGP. Rana was responsible for cruel harassment and murders of innocent people in the villages of Punjab. Including that of Badal’s whole family. An honest police officer (Amrish Puri) and his family give shelter to young Badal where he falls in love with Rani Mukherjee. Badal’s aim remains to kill the treacherous police officer who had killed his parents and his loving sister. After several twists and turns he meets the treacherous Jai Singh Rana who has now become a DIG. How the hero accomplishes his revenge forms the rest of the story?